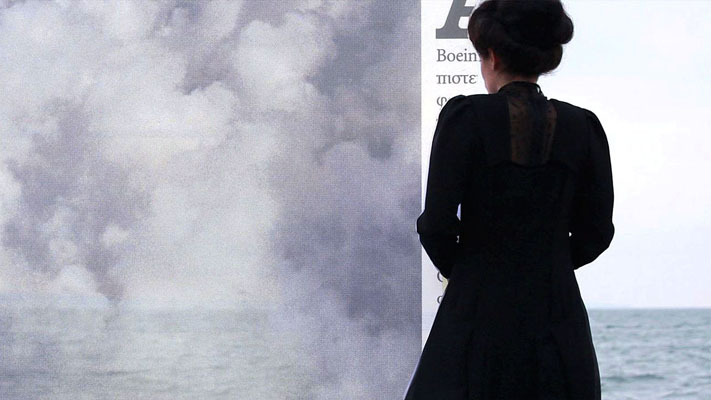 The video deals with concepts such as memory, absence, flight and concealment, suggesting an interpretation of the world beyond mere description of the events taking place in it.
A woman is shown in two different periods of her life. At first she is being shown at the abandoned treasuries of the former 'Banque de Salonique' (1907-1940), at second at private shipyards near the city of Thessaloniki.
Her hands sew a 'cloud', they touch it and shape it, and through sewing/writing give it a different meaning which exceeds material and transforms into an idea.
This poetic image is a reference to creative freedom beyond social conventions, territorial and state boundaries. If the clouds are our thoughts, our desires, our losses, our memories and disappointments, they inhabit a single sky. The clouds/symbols sometimes come together as one, while at other times they retain their autonomy and trough their shadows filter and scatter light like watercolour painting, over the place where we live.
The sewing machine is a symbol of home and family, of cohesion. It contributes to making us feel we belong somewhere.
It fosters the remaking of private space, after the disaster or violent relocation to another place.
Through the hands of the woman who sews, time floats in silence, it exists eternally and transcends the convention of finality, it becomes a thread, it moves and pauses, it draws ideas, dreams, visions, passing from the realm of utopia into reality.

'The Cloud' is a video commissioned by the Ethnologican and Folklife Museum of Macedonia and Thrace in Thessaloniki.